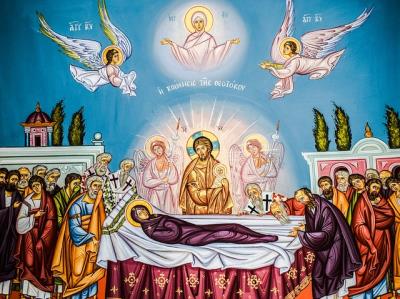 The Assumption of Mary into Heaven (often shortened to the Assumption) is, according to the beliefs of the Catholic Church, Eastern Orthodox Churches, Oriental Orthodoxy, Church of the East, and some Anglo-Catholic Churches, among others, the bodily taking up of Mary, the mother of Jesus, into Heaven at the end of her earthly life. The analogous feast in the Eastern Churches is known as the Dormition of the Theotokos.

Assumption of Mary by Wikipedia is licensed under CC BY 3.0