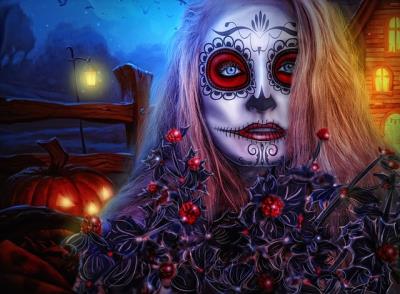 All Saints' Day, also known as All Hallows' Day, Hallowmas, the Feast of All Saints, or Solemnity of All Saints, is a Christian solemnity celebrated in honour of all the saints, known and unknown. Its intent is to celebrate all the saints, including those who do not, or are no longer, celebrated individually, either because the number of saints has become so great or because they were celebrated in groups, after suffering martyrdom collectively. From the 4th century, feasts commemorating all Christian martyrs were held in various places on various dates near Easter and Pentecost. In the 9th century, some churches in the British Isles began holding the commemoration of all saints on 1 November, and in the 10th century this was extended to the whole church by Pope Gregory IV.In Western Christianity, it is still celebrated on 1 November by the Roman Catholic Church as well as many Protestant churches. The Eastern Orthodox Church and associated Eastern Catholic and Byzantine Lutheran churches celebrate it on the first Sunday after Pentecost. The Church of the East and associated Eastern Catholic churches celebrate All Saints' Day on the first Friday after Easter.

All Saints' Day by Wikipedia is licensed under CC BY 3.0

Next holiday is: Feast of the Immaculate Conception (December 8)